CPR Training is a Routine “Exercise” that Could Save a Life 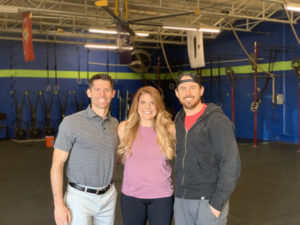 Today’s blog speaks with Brandon Head, owner, Grapevine CrossFit in Grapevine, Texas regarding his experience when a cardiac arrest occurred in his facility.

Brandon, thank you so much for speaking with us. Would you tell us what happened?

It was a routine Friday. My facility is located close to DFW Airport, so we frequently see drop-in traffic from airline employees who don’t live in the area but who fly in and out and need a place to exercise while they’re here.

A pilot had come in that morning; we’d seen him a couple of times before during his travels. One of my coaches, Jordan, was watching him as he worked through the workout for that day. Everything seemed normal, and he finished the workout without issue. But, as he paid Jordan for his workout, he collapsed suddenly to the floor.

I heard his fall and turned. I rushed over and it was immediately apparent that this was not a case of passing out from over-exertion. He was having a cardiac arrest. As I ran to get the gym’s AED while calling 9-1-1, I yelled for our staff physical therapist, Dr. Matt Taylor, to come with me back to the patient.

Matt rolled the victim onto to his back. He was not breathing and was without a pulse. After a shock from the AED, Matt then performed two rounds of chest compressions and rescue breaths. At that point, the patient took a gasping breath and woke-up. He even tried to stand, disoriented and confused. We heard the sirens just then as the EMS arrived.

The total time was less than five minutes; it felt like forever.

After EMS took him away, do you know his outcome?

Jordan and I did go to the hospital to visit him. We learned that he had had a 90% blockage in his left artery, and the doctors fitted him with two stents. He was very appreciative for our actions, and he even came back in to the gym to thank us after he was released from the hospital.

As is often the case, he doesn’t remember anything in between the time of payment and the EMS standing over him.

Is your team trained in CPR?

Our gym requires staff CPR training, and the American Heart Association (AHA) is who we use. We purchased the AED four years ago as a precautionary decision, after one of AHA’s trainings. This was the first time that we have ever deployed it—and I can now testify that it is worth the investment.

The quality of the training the AHA provided my team was very in-depth. Having never been in that kind of situation before, I do believe that it made a difference in our quick response. Because of what happened, I’ve decided to raise awareness with other businesses in our community about the importance of training and having an AED on-site. This kind of incident can happen anywhere, not just at the gym. If you’re a company that cares, have a process in place so that you know what to do when needed. Learn more about AEDs at www.heart.org/AED.